Our Conductor was interviewed in the latest issue of WholeNote!

The following article was published in Volume 23, Issue 8 of The WholeNote magazine. Read the original article here:
https://kiosk.thewholenote.com/volume-23-issue-8-may-2018/60049980

The Icing On The Cake

Jenny Crober and I are chatting over the phone. She’s in New York City with several of the choristers from VOCA Chorus of Toronto and the Achill Choral Society from Orangeville. They’ve spent the last few days rehearsing with James Meaders, the associate artistic director of Distinguished Concerts International New York (DCINY) and composer-superstar Ola Gjeilo. Crober and crew are in NYC with DCINY to perform a concert of Gjeilo’s work onstage at Carnegie Hall with choirs from across the world. “There were 250 singers,” shares Crober. “It was a bit of a crush to fit us all onstage. And it was hot, but lovely.”

It is moments like these that are hard to put into words: why do conductors do this kind of work? Why sing under intensely hot lights and packed like sardines? Why drive two hours each way to lead rehearsal? Why spend hours studying scores and making notes in private? Why conduct at all? Last year in May, we explored with a range of choristers the reasons they give up so much of their time and energy to choral music-making. This year, I’m chatting with choral conductors to get perspective on the power of choral music in their lives, and why they do what they do.

When she’s in Toronto, Crober raises her hands to lead VOCA Chorus; Cheryll Chung, an accomplished pianist, founded the Cantabile Chamber Singers in 2006; powerhouse Karen Burke leads the Toronto Mass Choir; and you’ve probably seen Shawn Grenke in action as associate conductor of the Amadeus Choir. Here they all share their ideas on the hard work of conducting and choral music.

Crober started working with VOCA (when it was still the East York Choir) in 1991 as an accompanist and took over the reins in 2004. Over her tenure she has seen VOCA (the name-change was in 2011) double in size. The choir is a whole different beast now, she says. “We have professional singers, doubled the size and have choristers from across the city and beyond. This gives me impetus to keep on as the choir continues to grow into what we’re becoming.”

Conductors are uniquely able to pull on the threads that pull community together. And community is the common theme that all these conductors bring forward. “The community outlets need to be present for people to fall in love with choir – to fall in love with conducting and community music,” says Burke. Cheryll Chung says, “It is really important as a conductor to connect with your ensemble and build a sense of community and trust, so that it can enable you to get the music across.” And Grenke tells me: “I love bringing people together. I find that when I get into the rehearsal, and the rehearsal process, it’s transformative. I get an energy from the singers and we create something great.”

Choral conducting success stories often feature conductors who have been successful in reaching out and building community, sometimes from scratch. “Those people who are thinking outside of the box about what choir can be. It doesn’t have to be just Bach chorales or Mozart’s Requiem or school choir. I think it’s up to us, who are teaching students, to remind them there is more to the world of community music-making than being a music teacher at a school board or a tenured professor at a university,” Burke says. “There’s such a broad array of positions, and a lot of time people just create their own space. They move into a neighbourhood that doesn’t have a community choir or organization and make it happen. If you have a passion and find the void, take your passion and fill the void.”

That passion, when conveyed by a conductor, is what brings people back over and over again. And in a city like Toronto, the breadth and depth of choral music is astounding. (Take a look at the Canary Page listings just to get a small taste of the diversity of the Toronto choral scene.)

“A good conductor is a teacher at heart,” says Burke. “If you don’t like people, you’ll be a terrible conductor. What I see, the people who are doing so well, the people who have built organizations – that comes from a love of people.” There are many people who can read music, can speak the language of music, but don’t know how to speak the language of people and relationship-building. Shawn Grenke gets this as well: “As a music educator, I [conduct] to keep music alive, and more import-antly to keep people singing so the music stays alive.” It is about people, it’s about “enjoying the experience of giving, together,” says Burke. “If people are in that space, then great.”

Success as a conductor requires success in all the people who make up a choir; Burke, as a conductor and as a teacher, looks for some-thing more than just musicianship in potential conductors and musical colleagues alike. She’s looking for a spark, someone who can communicate beyond the page of the music. “There isn’t an ABC to being a choral conductor; you have to seek it out,” she says. There is no clear path to conducting and much trial and error involved.

Cheryll Chung was the only choral candidate during her time completing a Masters degree at U of T. After she graduated, she had to figure out the path for herself. “What do you do?” she shares. “A lot of graduate students start their own ensemble or choir. At first, [with Cantabile], I thought I’d just do two benefit concerts a year. I did that for a while for organizations like the Regent Park School of Music, the Canadian Cancer Society and Literature for Life, for example. This was the premise: let’s do concerts for the causes. But then, it gives you the energy to keep doing what you’re doing, to make the connec-tion with audiences and members and connect with different people.” Chung started Cantabile as a pilot in 2006 and she continues to lead the ensemble. The key part for her has always been community: “Community building is a hard thing, and you really need to want that, and have it inside of you.”

The financial strain of the work can be challenging too. Music is expensive, rental of rehearsal space, paying guest musicians, and all the administrative and marketing costs are not insignificant; there isn’t always a lot left over to pay the conductor. “A lot of my musi-cian friends, I think they feel financial stress and take the gigs as they come, no matter the scenario,” says Grenke. “It’s hard as a musician, as a freelance singer or conductor. It’s hard to find enough work to
live.” I appreciate his candour, I tell him: I have some knowledge of that life first-hand.

As audiences, we show up in the seats of a performance and criti-cize or enjoy the music. What we don’t see is the music teacher awake since 5:30am, teaching all day, then driving 90 minutes one way to rehearse for two and a half hours two or three times a week. Or the conductor that works seven or eight gigs a week to make ends meet. As Chung says: “The performance is just the icing on the cake.” Weeks before a performance, a choir gets the music and begins the process of rehearsing and refining. This is the hard work. This is where the rela-tionships and community are built. This is where conductors shine. And only if it all goes well do you get a chance to taste the icing.

“There are moments,” says Crober, “when standing on the stage with 250 other people all responding to the music, and one person on the podium, you think – how lucky is that? To be able to do that – to sing in a group of people and make this exquisite music… and it is a moment of ‘Yeah, this is why you work so hard.’ For this.” 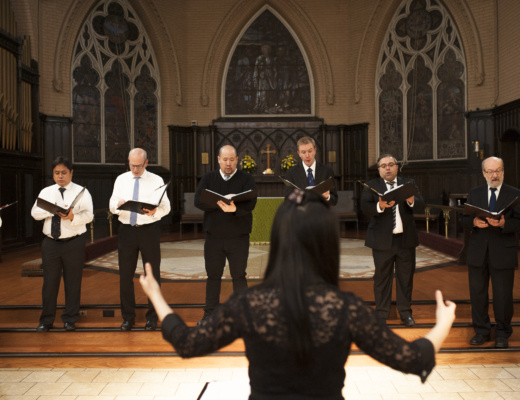 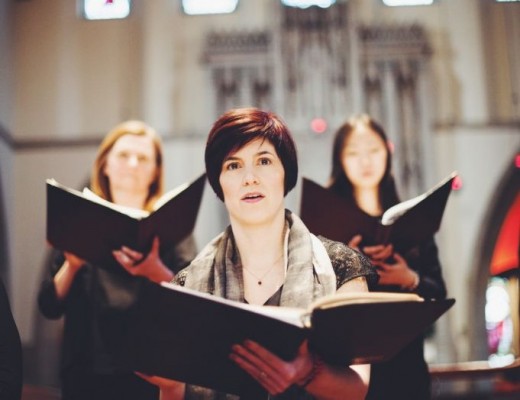 We are preparing the Coronation Mass by W.A. Mozart and it is sounding great! Our first rehearsal with the orchestra was amazing! The concert is on  Saturday May 30th at St. Luke’s. Please visit the Counterpoint Community Orchestra website…